Images from The Illig Telescope


Last summer, The Howard County Astronomical League received a valuable gift.  Leona and David Illig presented us with a Takahashi TOA-150 telescope and an Astro-Physics 1200 GTO mount. Thank you.


On November 10, 2018, I acted as Certified Telescope Operator for the evening's Public Star Party.This gave me my first opportunity to operate the Illig under clear skies.
Excitedly, I arrived at HALO very early. Knowing that any astrophotography project requires calibration data, I fully intended to acquire a set of Flat, Dark and Bias frames before anyone arrived for the evening’s festivities.

The Illig is a fantastic instrument. It is a refractor which means lenses are used to focus the image. With a 150mm (Six-inch) lens and a fast F/7.2 focal ratio, the Illig marries a wide field-of-view and very bright images. This combination is key to providing wonderful imagery.  The telescope, mount and image capturing software are very easy to set up. Observatory set-up procedures can be found on the HAL website, so I won't get into the particulars here.

Even CTO's don't know everything about the observatory. Sadly, I spent the time I planned to capture flat field images searching for a key to a fuse box.

By the time Chas arrived to tell me there was no key to the fuse box, the sky had darkened making flats impossible to acquire. Moreover, star party guests began to arrive, so I nixed the idea of capturing calibration data and slewed the scope to the moon for the public to see. It saddens me that I couldn't get any flats. Many surfaces are dusty as can be seen in the following images.  At least the evening's result prove calibration data is not a prerequisite for obtaining pretty pictures.
Although we began the evening by pointing the scope toward well-known objects such as The Moon, Mars and Alberio, we did not begin saving images until the sky darkened sufficiently as to not overwhelm our long exposures. Generally, we kept to 30-second or 120-second exposures shot at 139 or 300 gain. Realizing the bulk of our imagery would be flawed as we slewed the scope between targets, centered the target on the frame and experimented with exposures, we hoped to get three or four good images of each target.
We began saving images while the scope was parked on M31, The "Andromeda Galaxy."

Even the wide 73’X49’ field of the Illig cannot corral this huge galaxy. I used Pixinsight, a powerful yet notoriously difficult to use application, to process the images. I didn't choose Pixinsight for its features or to scare the casual photographer away. I needed it to create color images.
While capturing the images, I didn't notice that Sharpcap (the application we use to capture images) was saving the data in .PNG format. Superficially, PNG images appear to be monochromatic (black and white). A "debayering" process must be performed in order to tease the color information out of the image. I found Pixinsight had the best debayering algorithms for my purposes. Since I was already using PixInsight to debayer the images, I merely continued the process and used Pixinsight to stack the images as well. Trust me, I used none of Pixinsight's "magic" on these images.

You can avoid all this unnecessary complexity by saving your images in .TIF format which automatically generates color images that may be stacked and processed in a variety of free applications.
Back to the image: There are many unusual objects in the field. Of course, M31's companion galaxy, M32, may be seen. However, a lot of those "stars" in the foreground are not stars at all. Instead, they are globular clusters that orbit the Andromeda system 2.2-million light years away.
Here is a shot of our image (upper) and an image I grabbed from the Internet at the site http://www.astroschmiddi.com/details.asp?ID=17,


I bet you never thought that you would be able to image extra-galactic globular clusters.
Another galaxy in the area was M33, "The Triangulum Galaxy." Slightly farther away than the Andromeda Galaxy, M33 is a notoriously difficult object to observe and image. Its surface brightness is too faint to render the object spectacular in all but the largest telescopes.
Here is our effort: 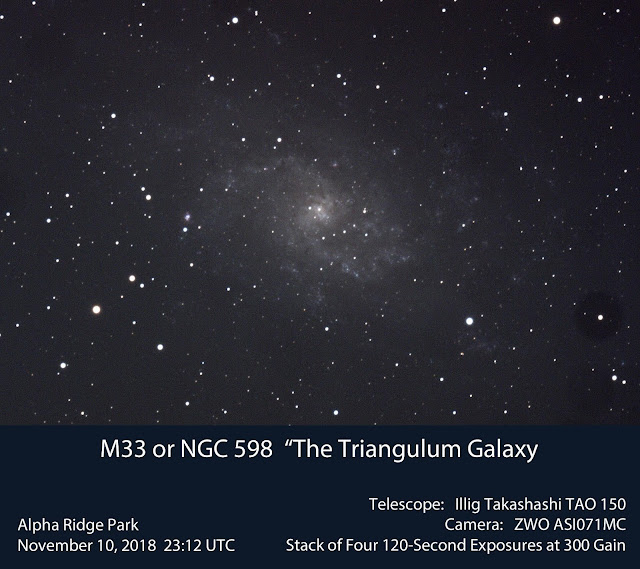 Considering M33 was deep inside of Baltimore's light dome when we imaged the object, I think this is a great shot. Remember, we achieve this result without calibration data. We merely stacked the images and adjusted the contrast. M33 will be a perfect object on which to perform "imaging magic." Here is a quick process of the inner portion of M33 with a bit of "Local Histogram Equalization" applied. Again, just four images with no calibration data.

Some may believe our imagery of M57, "The Ring Nebula" to be disappointing. With its wide field, The Illig may not be suited for imaging small objects. If desired, a barlow lens may be attached to increase resolution at the cost of reducing the field of view. In this image, I like the appearance of the tiny nebula engulfed in a sea of stars. 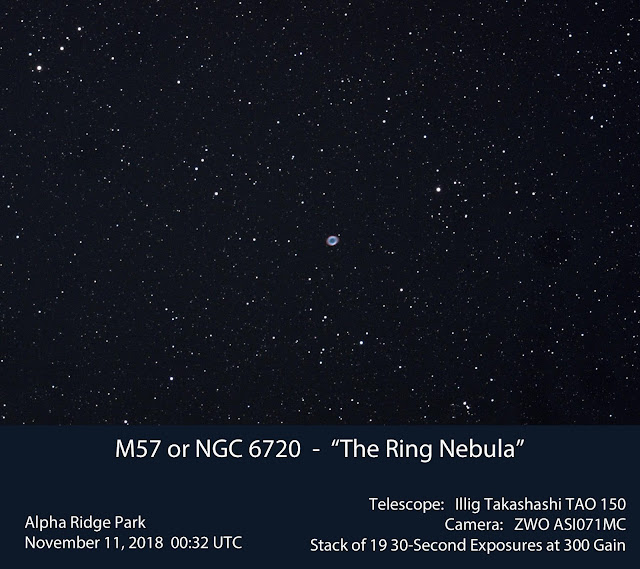 Although that image consisted of 30-second exposures, I grabbed a few 120-second exposures while no one was looking. Knowing the ring would be overexposed, I really wanted to test the scope to determine how deeply we could image. I compared our star field to the website http://www.sky-map.org/.  As you can see, we easily captured 17th magnitude stars and the distant galaxy IC 1296 in these few uncalibrated images! 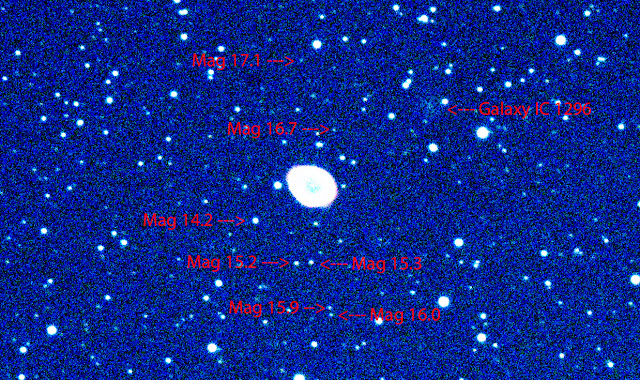 A more appropriate planetary nebula for the Illig, M27, "The Dumbbell Nebula" drew gasps as the first image appeared on the screen. Here is our stack of four images: 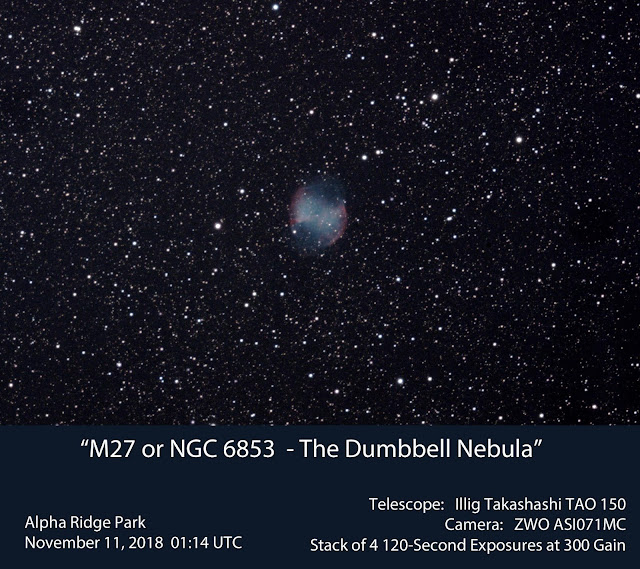 One of the biggest surprises for me was the results of our imaging of "The Deer Lick Group." These aren't bright galaxies. Instead, the main galaxy, NGC 7331 shines at magnitude 10.2, while those background galaxies to the right (the deer) shine faintly at magnitude 14. 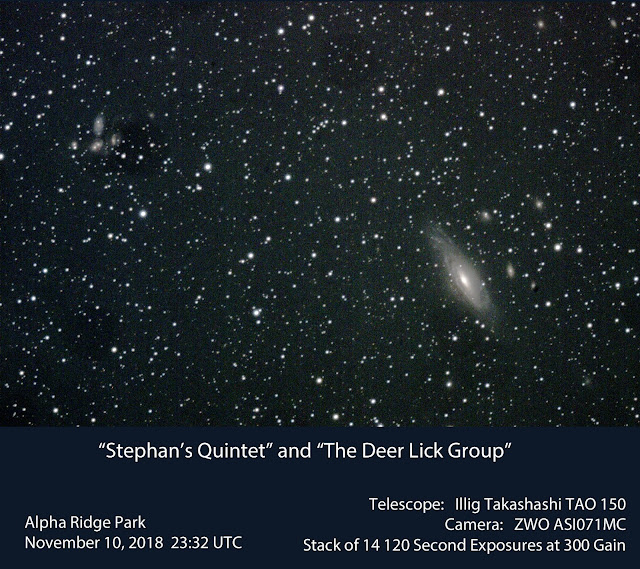 I believe it was Wayne Baggett who pointed out "Stephan's Quintet" in the upper left area of the image. Admittedly, I was surprised we could capture these 13th and 14th magnitude galaxies in a single image. Although observing Stephan's Quintet impressed all club members present, the tiny fuzzies did little to impress members of the public. Therefore, we moved the scope to another deep sky object in Pegasus, Globular Cluster M15 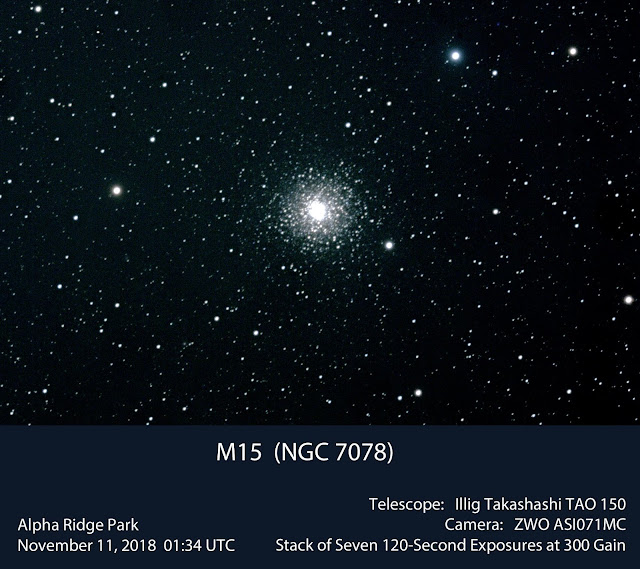 Another galaxy that surprised us was NGC 253, "The Sculptor Galaxy."  Technically the fifth brightest galaxy visible from Alpha Ridge, The Sculptor never gets high above our horizon and is often overlooked by mid-northern observers. I love this galaxy, having imaged it several times from Georgia and Florida.

Here is our effort. Like M33 in Triangulum, I believe this object would benefit dramatically with proper image processing treatment. 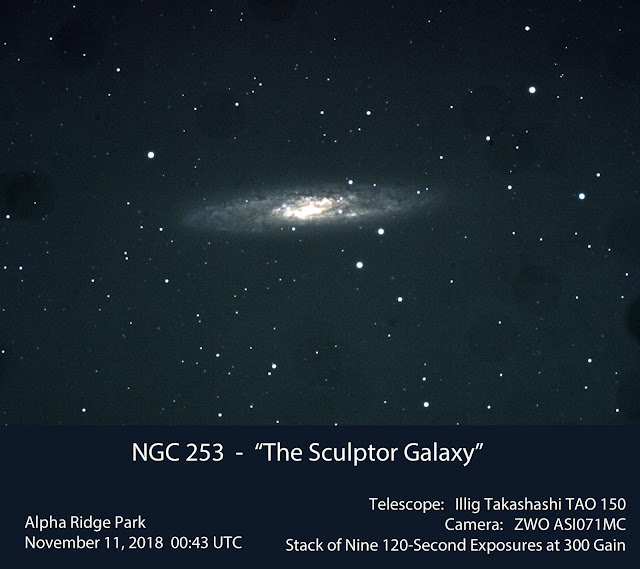 One of the last objects we imaged was "The Veil Nebula." This supernova remnant is extremely difficult to image beneath light polluted skies. Although I had a good idea where the previously imaged objects appeared in the sky, for some reason, I didn't really know where to find "The Veil." Soon after I typed in the proper NGC number, the scope slewed to a point in the constellation Cygnus nearly perfectly centering the famous foreground star, 52 Cygni!  A little contrast stretching brought out the nebula. Here is our effort: By the time the time the public star party officially ended, M42 "The Orion Nebula" cleared the lip of the dome. Freezing and tired, we slewed the scope to this famous nebula. Although we weren't impressed with the results (the nebula was deep in light pollution and ground haze) we did get a jolt from the number of geosynchronous satellites passing the field. You can see a few passing in the lower right of this four-frame .GIF. What a great way to end the evening.

Late autumn star parties last forever. With the sun setting before 5:00 pm, our event had lasted more than six hours. As we packed up, I looked forward to processing the images over the next days.
Personally, I am proud of what we accomplished. Granted, if you look closely, you can see dust donuts created by the lack of flat fields and varying background brightness that are a hallmark of poor or no calibration data. Likewise, for better results, we should have taken more images of each subject. But, we were hosting a public star party. Of course, we prioritized showing our 75 guests the stars.

These images clearly exhibit the quality imaging any reader of this blog can accomplish with HAL's new equipment. You no longer need to know your way around the sky. The telescope slews itself to any object you desire. You no longer need to worry about longer exposures. The mount is rock-steady in its unwavering tracking. The observatory's television screen shows you each image you capture. All you have to do is put your images on a thumb drive and take them home to process and share with friends.