Looking for one Satellite - Finding Many


One of the great things about astrophotography is the ability to revisit old datasets. As we acquire new skills and new processing software, we sometimes discover thing in images we discarded months or even years ago. Not a fan of imaging in sub-zero (Celsius) temperatures, I have used the past few weeks to look for interesting discoveries in last year’s images. Astrophotography is, in many ways, the gift that keeps on giving.

Nearly a year ago, Jupiter’s faint inner moon, Thebe was going to pass its greatest elongation from Jupiter between its brighter moons Europa and Callisto. Moreover, Jupiter ‘s impending opposition promised to brighten Thebe to maximum detectability. Always a fan of a Solar System challenge, I planned accordingly. 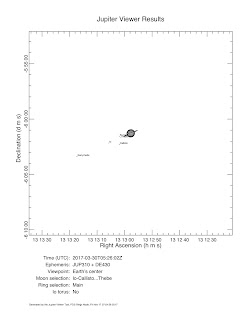 As on many early spring evenings, the wind blew furiously on the night of March 29. Undaunted, I set up in my driveway and began imaging Jupiter. My plan was to capture 30 subs in each of four different exposures later stacking them to hopefully bring out the faint moonlet from the glare of Jupiter.

Almost immediately, a streak of light crossing the computer screen caught my attention. Clearly, an Earth-orbiting satellite strayed into the telescope’s field of view. I noted the curiosity and begin my imaging sequence.

As I images, Jupiter and its moons wiggled all over the screen.  Not only was the night windy, the seeing could not have been worse.

Soon, another satellite crossed the field of view. Happily, I captured this apparition as I was actively imaging at the time. 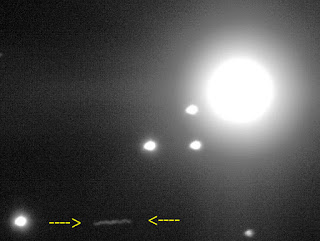 During my imaging routine, seven satellites crossed the field. I captured two of them. Each crossed at the same speed with the same angle. While the cluster of artificial satellites and space debris occupy random orbits and inclinations, these seven satellites seem to follow the same routine, What could they be?

Jupiter’s declination at the time of this observation was -06°01'30".  Not surprisingly, the belt of geostationary satellites appears at approximately -6° from our location 39.5° above the equator. Serendipitously, I happened to image Jupiter during the two hours it crossed this belt. Things never work out that well for me.

Recently, I used Photoshop to create a little animated .GIF of the sequence. I was forced to overexpose Jupiter in order to make the much fainter artificial satellites more visible.

If you want to try to image geostationary satellites, Sky and Telescope published a great article detailing “How to See and Photograph Geosynchronous Satellites."

If you wish to duplicate my observations, Jupiter should re-cross the band on March  14, 2022.

Keep Looking Up to Clear Skies.