Amateur astronomers loathe the month of March. Daylight Savings Time steals yet another hour from our rapidly decreasing observing time. As the glories of The Winter Milky Way plummet toward the western horizon, summer stars fail to rise early enough to easily observe. Orion is leaving us, but I was able to image his splendors one last time before I said "Goodbye."

Recently, I purchased an iOptron SkyGuider.  Because I love to travel, I often find myself beneath brilliant desert skies or unfamiliar southern constellations unable to take long exposure photographs. The SkyGuider promised to remedy this problem.

Basically a very portable equatorial drive, the SkyGuider attaches to any camera tripod and handles up to 20lbs. of equipment.


Set up takes ten minutes. Just attach the SkyGuider to a tripod, level it reasonably well and use the polar scope to point toward Polaris.  iOptron even provides a really cool app that displays exactly where to place Polaris in the field of view. 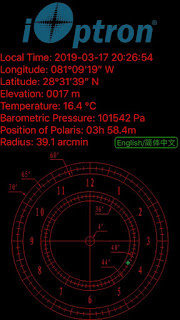 Northern Hemisphere observers place Polaris somewhere on the inner circle while Southern Hemisphere observers use Sigma Octants and the outer circle.
The SkyGuider arrived in December. Of course, it rained or snowed for three consecutive weeks. The first clear night, I attached my ZWO 1600 to a filter wheel and a 60mm Canon Macro lens. Within 15 minutes, the contraptions was set up, and I was outside imagining wide field, Hydrogen-Alpha shots of Orion! 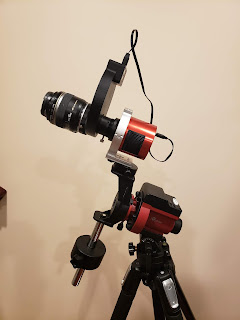 A few minutes later, I wasn't imagining. The first image clearly showed The Horsehead and Barnard's loop without processing. 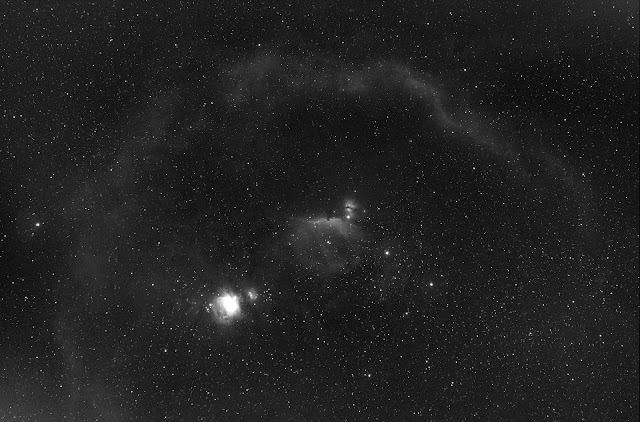 Zooming in on individual stars revealed perfect circles despite the five-minute exposure. 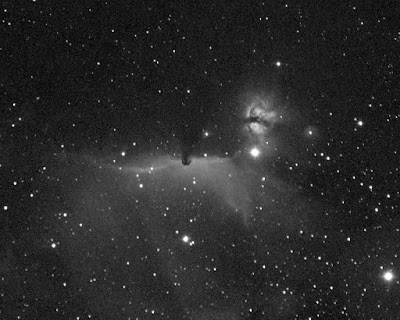 A few weeks later, a friend invited me to join him while he observed galaxies from Florida. Seeing a perfect opportunity to test the portability of my new set-up, I quickly packed tripod, cameras, filter wheel, computer and the SkyGuider mount in a carry-on and hopped a flight to West Palm Beach. Everything fit splendidly into my bag. More importantly, Airport Security allowed my bag full of cables, motors and strangely-shaped metallic objects through without incident. I even had room to include cloths!
Although I had scribbled an observing list on the flight down, Orion beaconed from his perch unnaturally high in the southwestern sky.
I pointed the Zwo camera and 60mm Canon lens toward Orion's Belt and began imaging. Running through seven of my eight filters, I got several 60-second exposures using the luminescence, red, green and blue filters before moving on to five-minute exposures in the narrow bands of Hydrogen-Alpha, Sulfur II and Oxygen III. Although clouds continually threatened the observing session, it looked like I acquired a nice data set.
Using Pixinsight to stack, Hydrogen-Alpha and red frames and combining them with green and blue stacks gave this result: 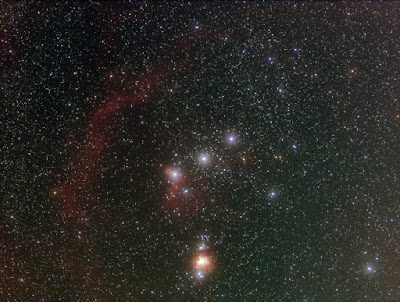 Barnard's Loop is the red crescent to the left while the familiar forms of The Horsehead Nebula and Orion Nebula grace The Sword. Unfortunately, The Witch Head Nebula is just off the frame to the right. However, if you look closely, you can see M78, The Flame Nebula and M43. 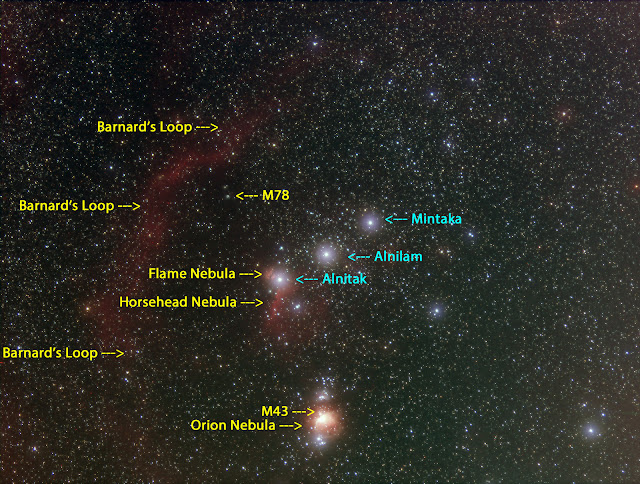 For presentation to the club, I zoomed in on the more famous aspects of Orion giving this result. 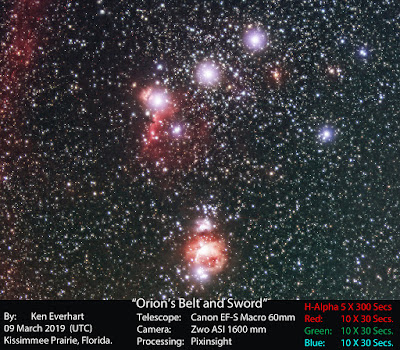 When one points a camera toward the heavens for a couple of hours, many objects visit the field. Here is the entire data set of 57 images stitched together into a little movie. I like how the Nebulae brighten and disappear as different filters display more or less of their narrow-band light.

Look closely toward the area southeast of The Horsehead. On the first few frames a bright object slowly makes its way east.

For most of the United States, the ring of geostationary satellites bisects Orion. Typically, these distant objects rarely reach 10th magnitude. However, this object nearly rivals magnitude 1.9 Alnitack in brightness. Its very slow motion and position prove that it is a geostationary satellite. But the flash must be a glint of sunlight reflecting off of some smooth surface on the satellite. Sun glints this bright are very rare, and can be seen rapidly fading in the final few images.
I wish that I had been looking at Orion while I imaged the area. Unfortunately, my attention was drawn to those clouds that you can see passing nearby.
Using calsky.com, I identified this object as a defuncted Russian communication satellite, "Ekspress MD1."  Launched in 2009, the satellite abruptly failed in 2013. The satellite is presumed to be tumbling thus explaining the change in brightness. 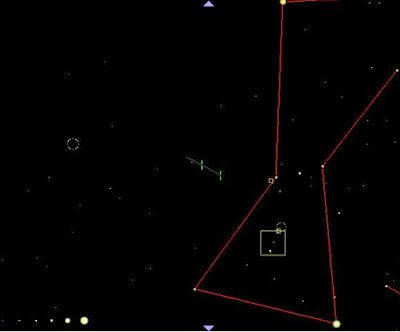 Another interesting object may be seen in Frame 48, a 300-second exposure using the H-Alpha filter. 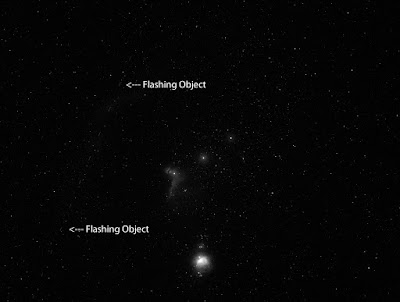 Although one might immediately jump to the conclusion that it is a "flashing satellite" (an inert piece of space debris tumbling in orbit), a closer inspection reveals otherwise. 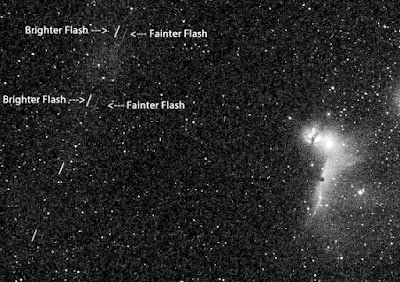 Notice how the brighter flashes are paralleled by considerably fainter flashes? No satellite pair can travel together in space and flash with the same period. Instead, this object must be a run-of-the-mill aircraft passing overhead. At cruise altitude, aircraft flash two Navigation lights, one red and the other green.
The 657nm wavelength passed by the Hydrogen-Alpha filter is deep in the red end of the visible spectrum. Consequently, the red Navigation Light registers much brighter than the green Navigation Light.
Don't worry, I did capture a satellite that made a single flash. It appears on two 60 second images using a blue filter.

At first glance, this object appears to be a meteor. However, most meteors brighten quickly culminating in a bright flash that rapidly fades. This flash brightened and faded quite slowly leaving a symmetric path. Therefore, it must be an object orbiting Earth momentarily glinting in sunlight.

Of course, the entire evening was not spent imaging Orion. Finding myself beneath southern skies, I switched to a 90mm F/5.6 ProOptic lens to image objects that do not rise above my mid-northern latitude horizon. 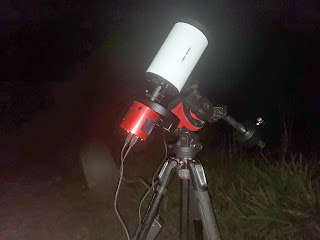 The Skyguider functioned well despite the additional weight of the heavier lens. I chose the famous objects, Centaurus A and Omega Centauri  to image. 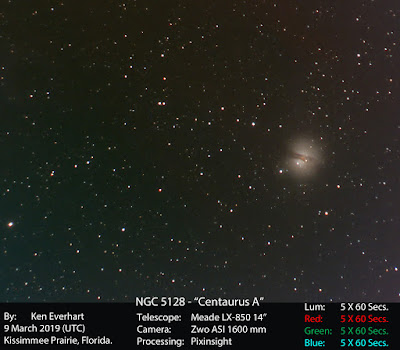 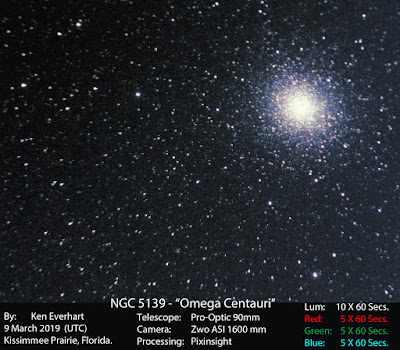 Apparently, I have become quite spoiled by today's "Go To" mounts. Star hopping from Virgo, through Hydra and into the unfamiliar starfields of Centaurus proved quite a challenge.

These objects were only 15° and 12° above the horizon respectively. I didn't present them centered in the frame because the right side of my imaging attempts was marred by persistent clouds that I could not process out of the image. Still, I think they are great shots considering the clouds and the height of the objects above the horizon.

Overall, the test run of the iOptron SkyGuider can be deemed a success. The SkyGuider performed admirably under the dark Floridian skies. I got a beautiful image of Orion and look forward to returning from my travels with additional imagery of the night sky.

I look forward to your comments and questions.
Keep Looking up to Clear Skies.