While you may not have heard of this diminutive moon, I have been attempting to capture it photographically for over three years.  You might even argue that I have yet to image Miranda. It is difficult to see huddled close to its brilliant primary. Clearly imaging Miranda is no easy task. However, with a little patients and a lot of image processing, Miranda can be coaxed out of the pixels of an amateur CCD camera.


Miranda is the fifth largest satellite of the seventh planet. It had its fifteen-minutes of fame way back in 1986 when Voyager 2 reconnoitered its system. Miranda stole the show boasting a patchwork of smooth un-cratered terrain, an odd “Racetrack” of 12-mile deep valleys and sheer cliffs towering more than three miles into the sky.

However, I never forgot Miranda.  Since childhood, I have found planetary satellites fascinating. While other astrophotographers strive to capture the beautiful colors of The Trifid Nebula or the majesty of a spiral galaxy, I dig deep into my images to coax the few photons that I have captured from a distant ice ball. Never, did I believe I could actually image twenty-four of these planetary moons.

At Magnitude 16.6 and always girdling its 5th magnitude primary, Miranda is impossible to see and a challenge to image. It required an 84-inch telescope to be discovered in 1948. How could I have the audacity to attempt to recreate this feat?

Although I attempted many times to image Miranda, last October, I had a lot going for me. Observing from 29°N meant, placed Miranda 10° higher than I had ever attempted to photograph it. Likewise, I had a larger telescope and, Miranda was at opposition. With Miranda at its brightest, October promised to be the best time to attempt an image. 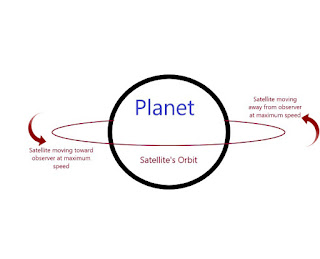 Miranda can only be imaged when it is farthest from its primary.  Sadly, I know of no software that offers this information. How could I determine the time of Miranda’s greatest elongation?

With its “Horizons" website, The Jet Propulsion Laboratory offers a variety of information about observing any solar system object. One of the details available is “deldot.” “Deldot” gives the speed that an object is traveling relative to the observer.

Open the JPL Horizons website. Input “Miranda” as the Target Body. It is critical that “Geocentric” be used as the “Observer Location.” Otherwise, the results will be difficult to interpret as the application factors in the speed of the observer on a rotating earth. Once the time-span is selected, results are only a mouse click away.

Once the time of greatest elongation is determined, another JPL site, Rings Node - Planet Viewer , may be used to generate a graphic of the system and visualize where the object might be found. Fortunately, on the night of my observation, no other moon appeared on Miranda’s side of the planet.

I “2X2 binned” these images. This means that each pixel (each dot) of my image is the result of four (2X2) pixels on my camera. When one uses “binning”, the resolution plummets. However, the sensitivity of the CCD is increased. I needed no high resolution for my Miranda images. Instead, I required maximum sensitivity to attempt to capture light from the faint moon.

Although the green color of the primary is apparent, none of its moons can be seen. To coax the moons from the data, I stacked both my group of five and seven second exposures. I used “Registax” to stack the images. Although Registax was created to stack images of planetary surfaces, I use it to find the inner satellites of planets. To date, I have used Registax to image the tiny Martian Moon, Jupiter’s Amalthea and Saturn’s Mimas.

Stacking the images reveals two of the moons, but not the coveted Miranda.

Registax has a “wavelet” function. Wavelets are magical tools that used interference patterns to “blur” images of planets to reveal greater surface detail.  The program processes the black sky, bright primary and faint moon in the same way it processes a bright crater rim and dark shadow.

With a little adjusting of brightness and contrast, five moons become visible. I wish that Miranda’s image was farther from the overexposed center of the image. Unfortunately, seeing on the night of October 25th left quite a bit to be desired.

Photoshop may be used to remove the overexposed center and replace it with a second, better-exposed image. However, one begins to wonder when an image has been over-processed and begins to become fiction. 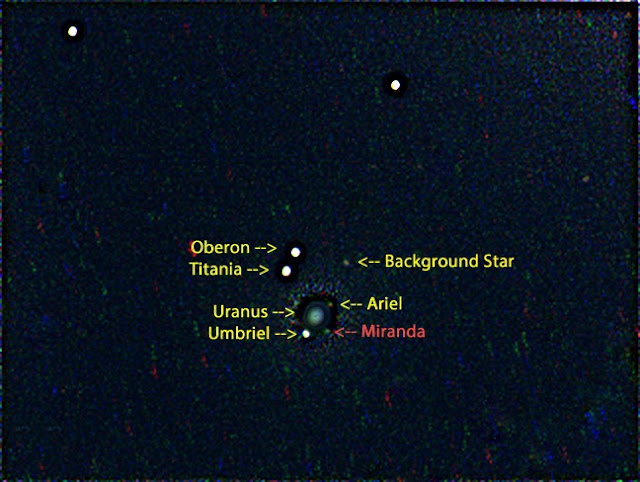 With this image of Miranda under my belt, I plan to attempt imaging other inner satellites including Jupiter’s Thebe and Pluto’s largest moon, Charon. I will let you know how I do.

So, there you have the story of my Miranda image. I invite your input.

Keep looking up for clear skies.