October 23rd found me and my telescope deep within the Okefenokee Swamp. I was excited. While the alligators watched me set up, the skies unexpectedly cleared and the temperature plummeted. Clearly, I was in for a wonderful night of astrophotography. Little did I know that I was about to learn more about my new hobby than the previous three years of fumbling through taking pictures of the stars.

The first lesson had already been painfully learned. Using the long drive to Georgia to mentally plan my observations, I prepared a long agenda of objects to photograph. I have been visually observing for years. Consequently, I prepared my observing list as a visual observing list. This was a mistake.

Visual observers build long lineups of objects to attempt to spot. Typically, it takes me less than 15 minutes to find an object, take a few notes about the object, philosophically reflect on the object (“Wow! This tiny smudge of light contains a trillion stars, and this light left those stars while the dinosaurs roamed the earth”) and move onto the next sight. Therefore, my observing list typically consist of scores of objects to attempt.

Of course, I built my photography agenda similarly long. With such a nice sky and view of the southern horizon, I planned to photograph dozens of galaxies in unfamiliar southern constellations as well as clusters and nebula along the “Backbone of The Night” – The Milky Way. I was even going to attempt to image Neried, one of Neptune’s far-flung moons.

However, I soon discovered that imaging the heavens is very different from visually observing the heavens. My observing plan was far too optimistic. Even if one plans to stack ten five-minute exposures of each object, nearly an hour of exposures is required. Adding in finding the object, centering the object, exposing flat frames, dark frames, dark flat frames and bias frames easily whittles down an observing list. I decimated my observing plan to five objects each night. Imaging Neried was a pipe dream anyway.

The first object on my edited agenda was NGC 891. Very close to the zenith this evening, NGC 891 is a beautiful edge-on galaxy in Andromeda. It looks like a mini Milky Way. Slewing my scope toward the zenith and utilizing an oversized dew shield, I centered the object in my field of view, took a few test images and set the BackyardEOS application on my computer to acquire 10 long-exposure images. As the click of the camera signaled the start of the first exposure, I broke two important rules of astrophotography.

While my camera obediently snapped its preprogrammed sequence, I left the scope to help a friend with his set up. When I returned, the computer screen proudly displayed the following image. What went wrong?

Never leave your scope for a long period of time, and NEVER, EVER stop looking up. Clouds, obstructions and strobe-flashing aircraft are attracted to the tiny square of sky you are imaging. They will ruin your images.
Although clouds effectively ended that night’s observing, the next two nights promised better weather.

NGC 253 was on the top of my list. Even if I failed to image any other object, I was not leaving Georgia without a good image of The Sculptor Galaxy.

Although it passed nowhere near Georgia’s zenith, I took advantage of my southern location to take ten images of the galaxy as it rose to its highest point in the southern sky. After seeing the first image, I know I succeeded in capturing The Sculptor.  Here are the first four images I acquired that night.

The next day, I used “DeepSkyStacker", a free application used to stack multiple images, to stack the best of the images.


Fiddling with the Brightness and Contrast brought out even more detail in the dust clouds of this starburst galaxy.


Next, I used the hue and saturation functions of Photoshop to increase the color range in the image. Although color differences could be seen in the original image, I fully admit to cheating. The central hub of The Sculptor Galaxy glows orange with the light of older stars. Meanwhile, the spiral arms are dominated by younger, bluer stars.  I tried to mimic these color difference by com pairing my images to a great image returned by The Hubble Space Telescope.

A little more tweaking of the brightness gave me a darker sky and a prettier picture.

Finally, I cropped the image to remove that annoying dark bar on the top of the frame.

I am not happy with the resolution. The image appears blurry to me. Unfortunately, the seeing was horrible during my visit.

Later in the evening, I was able to capture NGC 1300 in Eridanus. 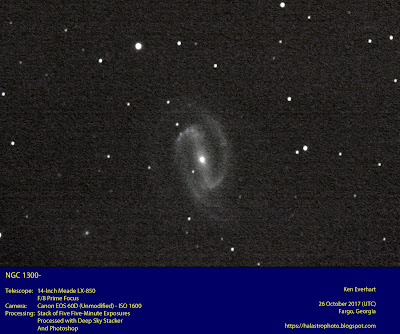 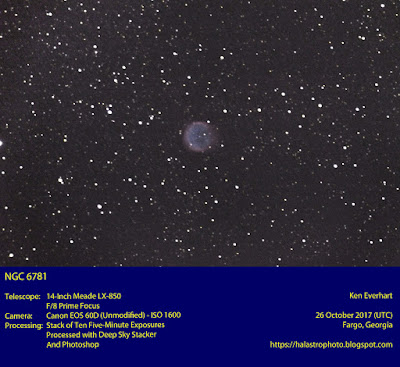 And The Little Dumbbell in Perseus 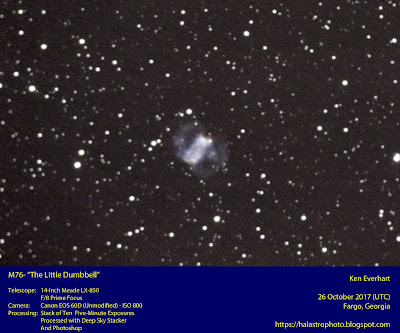 Indeed, this is a long blog post. At least, we learned five good lessons.

2)  Do your math. Do not attempt to image more objects than time allows.

3)  Never leave your telescope for an extended period of time.

4)  NEVER EVER stop looking up. Watch the area that you are photographing.

5)  Remember aesthetics. Even a technically well-done image can appear amateurish if
the object is not well-placed in the field.

I worded this post hoping that it leaves many questions unanswered. The purpose of this blog is to foster a dialogue between all of us. Feel free to ask any questions or leave comments. In the meantime, I will create the next few posts answering the questions I have secretly embedded in my writing.