Earlier this year, I set up my scope for planetary imaging. Sadly, the only planet in our winter skies was faint Uranus.  Undaunted, I slewed the scope to a bright “planetary” nebula. Recently, I revisited this imaging set to find a surprise.

2018 promises to be a banner year for those of us who love to observe The Solar System. Soon, a planet parade will begin as Jupiter, Mars and Saturn appear in the east while Venus pushes herself away from solar glare in the west. Wishing to hone my planetary imaging skills, I set up my scope and ZWO ASI224MC planetary camera on a clear albeit cold evening. The icy weather and lackluster skies had kept me indoors throughout the winter. Over my shoulder, I felt Orion mocking me as I fumbled in the icy semi-darkness to get my observing session started.

As I slewed the scope to Uranus, the sole planet above the horizon, I found it obscured by my house. My scope weighs 300lbs. There was no way that I was going to move this massive behemoth on such a cold night just to image Uranus' tiny featureless disk. Looking up, I realized that M57, The Ring Nebula, stood high in the western sky.  If the planets refused to cooperate, perhaps a bright planetary nebula would be a suitable alternative.

I used the famous “Double-Double Star” (Epsilon Lyra) to tweak my focus. As these four stars danced around the field, I realized the inferiority of the night’s seeing. With the Jet Stream and its 140 mile-per-hour winds locked above Maryland throughout the winter, turbulence has destroyed our seeing. This night was no exception, and I quickly lost my enthusiasm for imaging.

Nevertheless, I dutifully centered The Ring Nebula on the chip and snapped 25 15-second images of the famous planetary nebula. The muted spectrum of color of The Ring looked like a rainbow reflected in a choppy swimming pool. Disappointed, I packed up my telescope's freezing metallic surfaces and forgot about the images. Why does the weather always seem colder when breaking down your equipment?

Weeks later, while organizing my images, I chanced upon the M57 data set. Upon closer inspections, the images seemed decent enough to process. Now, I would never send these images to Sky and Telescope for publishing. However, I hoped something could be salvageable. I might even get a column for the newly-born blog.

While manually inspecting each image, I noticed a surprising linear feature on the 24th image of the set. All astrophotogrphers are accustom to the bright lines of artificial satellites bisecting our best images. Consequently, I assumed some wayward piece of space junk invaded my photography session, marked the image as unusable and moved on to the next image.


Surprisingly, the next image in the set did not contain the trail of the satellite. I shuttered these images simultaneously with no time between successive images. The slow-moving satellite should be apparent on the next frame, A quick estimate placed the length of the track as eight arcsecs and approximately 10th magnitude. Our moon travels through the sky at .5 arcsecs per second, so this object moved through the sky at approximately the same speed as the moon and must be approximately the same distance. Moreover, geostationary satellites at 1/10th the distance of the moon rarely achieve 10th magnitude. Therefore, this object must be huge – like alien space station huge.


Perhaps I should have contacted Fox News to tell them that I had just discovered a giant alien mothership in an inclined orbit a quarter of a million miles away from the earth. I am sure they would be interested. After all, I had photographic proof.

Instead, I looked for alternative answers.

Cosmic rays are highly energetic particles originating from high energy events mostly outside of the solar system. They wreak havoc on spacecraft by literally changing the contents of computer memory or marring imaging. When they collide with the earth’s atmosphere, they cause a cascade of secondary charged particles that rain down upon the surface.

The most probably cause of my rogue satellite trail is a cosmic ray. That night, a cosmic ray entered our atmosphere. Its fast speed and high energy knocked electrons off the atoms in several pixels of my detector as it skipped across my CCD. The software assumed that everyday photons were affecting the electrons in the CCD and dutifully reported a bright object in that part of the sky.

Ironically, I began the evening in hopes of photographing a nearby planet. Having acquiesced to imaging a dying star system 2,000 light years away, I ended up capturing what possibly is a piece of galaxy that existed long ago and very far away.

By the way, here is the processed result of the imaging session: 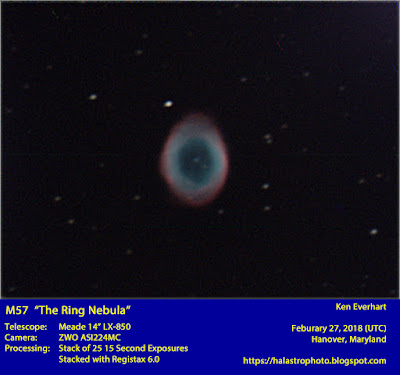