The Hidden Colors of Our Moon

The color of our moon fascinates me. It seems to be gray. In fact, Apollo images of the surface are often assumed to be monochrome until one sees the jarring color of a flag or gold-foiled instrument in the field. Recently, I was able to acquire colorful imagery of the moon. But, I cheated.

On the evening of August 25, 2018, the clouds briefly released their summer-long rein of our skies. Dutifully, I set up the scope in our driveway. Although the Moon appeared nearly full in the sky, I planned to focus on the four planets huddled low in the southern sky.

Sadly, the planets didn’t look like planets. Instead of being reflected by the ridged mirror of my scope, the planets seemed to be mirrored by the surface of a windblown lake. Their tiny disks danced all over the field of view.  With the such poor seeing, there would be no detailed planetary imaging this evening. With the Moon nearly full, there would be no deep sky imaging. Having exhausted my list of targets, I slewed my scope to the Moon. As I planned to only image the planets, I spent little time polar aligning my scope.

Instead of honing in on the center of the lunar disk, the telescope pointed somewhat south of the lunar equator quite pleasingly framing the crater Tycho.

100-million years ago, a five-mile-wide asteroid or comet struck the Moon creating the crater Tycho. It is most famous for its impressive system of rays emanating from the impact site. Caused by  material ejected during the impact, these rays cover a large part of the visible face of the Moon. At first look, all rays appear to lead to Tycho.

I calculated the exposures and imaged the Moon in red, green and blue light. I knew that combining these three colors would result in a gray on gray image with no color apparent.


Armed to image the planets, my filter wheel contained more than the typical red, green and blue filters. Therefore, I was able to add imagery with an ultraviolet filter used to image Venus and a hydrogen-alpha filter left over from a past deep-sky imaging session.

With 35 images in hand, I packed up and headed to the computer as clouds regained their rule of the night for the remainder of the month.
Some might find it odd that I chose the deep-sky imaging processing package. Pixinsight, to combine the red, green and blue channels of my data set. Pixinsight often is able to be tricked into combining lunar images. By registering the Moon images as “deep sky” and using star alignment, Pixinsight usually can register each red, green and blue image for easy RGB alignment and combining.

As expected, combining the red, green and blue images resulted in the familiar gray moon. I like the “shattered crystal ball” illusion. But, that is a result of composure rather than color.


Like most image processing applications, Pixinsight allows the user to display any image as “Red”, “Green” or “Blue.” To create a “Stretched” image, I assigned the h-alpha filter data to the “Red” channel, the green data to the “Green” channel and the ultraviolet data to the “Blue” channel.

The results surprised me. Parts of the Moon appeared to be a ruby red color while other regions appeared a steel blue. 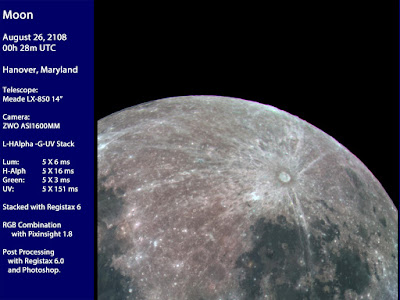 Here is the same image set enhanced a bit. 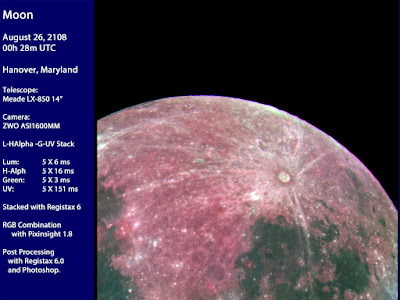 These colors looked familiar to me.  In 1992, the Galileo Spacecraft flew past the Earth-Moon System on its way to Jupiter. Galileo used its cameras to image the moon in multiple wavelengths. Here is the results of one of those imaging sessions. The spacecraft was 262,000 miles from the moon but only 43,000 miles from earth. Therefore, the perspective is nearly the same as we see from the earth’s surface.

At these wavelengths, color differences represent different compositions in the lunar soil. Specifically, the steel blue color of the lunar mare indicates a higher percentage of titanium that seeped from the lunar interior as molten rock flooded these areas.

I could enhance the color of my image to mimic the Galileo imagery, but I think that amount of enhancement is a bit gaudy.

It amazes me that today's amateurs are able to enter a realm previously reserved for spacecraft. Duplicating the Galileo imagery was a mere afterthought after poor seeing thwarted my planetary imaging efforts. I look forward to many imaging sessions using invisible light. I might even purchase a real infrared filter.