Thinking of Mars on the Eve of its Closest Approach 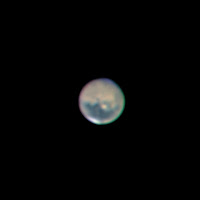 Its bloated disk promised to provide amateurs with splendid views of icy polar caps and ever-changing surface features. The last time it passed this close to the earth, we used flip phones. Half of our cameras still exposed film and our friends repeatedly inquired about that weird e-mail proclaiming a Mars that would appear larger than the moon in our skies. Unfortunately, Mars failed to cooperate. With a “planet- wide” dust storm raging, Mars, its featureless orb puffy in our eyepieces, had become a Red Venus.  Fortunately, there are ways to tease out some features in its atmosphere and surface.

This summer, I planned to be ready for Mars. I purchased a monochrome camera and filter wheel to allow me to observe Mars in a variety of wavelengths. Monochrome cameras are a bit of a pain. One must take multiple images, typically in red, green and blue light, in order to achieve a single color image. The trade-off is a crisper images with more accurate and vivid color. Not limited to familiar colors or even wavelengths visible to the human eye, images may be acquired in ultraviolet or infrared light as well.

Mars Season began for me on June 5. In the early morning hours, the Red Planet finally rose above the trees at a reasonable hour. That morning, I imaged only in red, green and blue light. 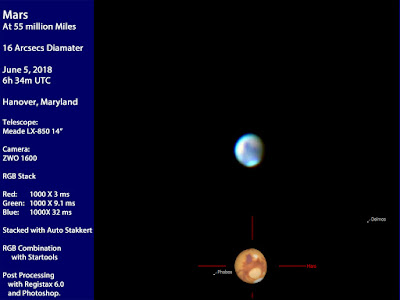 Obviously, my first image of Mars this season disappointed. Mars displayed a tiny disk on the camera’s chip. The seeing did not help as Mars refused to rise higher than 24 degrees above the horizon. At least Mars' main features, Syrtis Major and South Polar Cap were visible.

Undaunted, I dutifully continued to await this’ summer’s spectacle.

Meanwhile one of Mars’ seasonal dust storms began. Just east of NASA's Opportunity rover, winds began to elevate dust into the thin Martian atmosphere. These storms often begin as Mars passes its closest point to the sun. Typically, these are local events - not planet-covering. I found this news more intriguing than concerning.

With Mars rising late in the morning, I opted to hone my imaging skills on the more conveniently placed Jupiter and Saturn. These planets were much better placed. As I learned to operate my new camera by imaging these gas giants, I knew Mars was a prize that awaited.

Soon, astronomy and space exploration websites proclaimed a planet-wide dust storm. Optimism waned as astronomers all over the world failed to see even the most prominent surface features. NASA’s Opportunity rover even ceased functioning as its solar cells received little power from the sun's dimmed light. 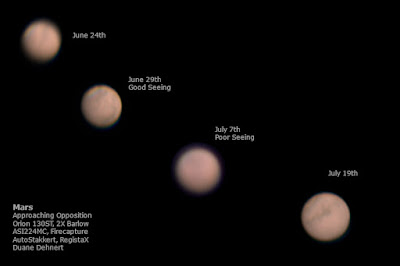 Maryland skies refused to allow me to image Mars until the morning of June 29th. As I videoed Mars in red light, I could see absolutely no surface features. Mars looked like Venus - without the phases. My filters cycled to the shorter wavelengths of green and blue. The polar cap popped out, but nothing else appeared. For fun, I included imaging with my CH4 filter and Ultraviolet filters.

Astronomers typically use CH4 filters on the gas giant planets. Because these filters allow only the wavelengths of methane absorption to reach the camera, CH4 filters reveal interesting detail on planets that contain methane in their atmosphere.


It was a sad night, the night I processed my first really good luminescence, red, green and blue images. The lack of detail was staggering. Mars was close and big. I used a 14” telescope and a decent camera. Instead, my imagery appeared to have been taken with a cell phone and four-inch reflector. 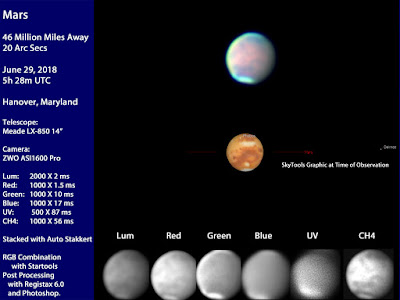 Crestfallen, I moved to the ultraviolet and CH4 stacks. Not surprisingly, the UV image showed no detail. However, the CH4 Image showed significant detail. Moreover, none of the features familiar to Mars observers could be seen on my image. It was as if I was imaging a planet other than Mars. Quite honestly, I feared the features might have something to do with my image processing or the local seeing. Mars hugged the southern horizon, perhaps the cause of these feature.

The next night, I attempted to repeat the observation. Happily, I discovered the unusual features had returned.  Here is the comparison of images acquired on June 29th and June 30th.

So, what are these features? Photographers have long known that imaging in longer wavelengths penetrates haze and dust. Ansel Adams used red filters to create the wonderful photographs of the American West. My CH4 filter allows a seven nanometer sliver of infrared light centered at 889 nanometers to hit the imaging sensor. We are seeing a combination of surface features through parts of the dust storm.

Meanwhile, club member James Willinghan has been imaging in infrared light as well. Unlike my observations, his infrared imagery is centered around 774 nanometers. It is interesting to compare his observations to my efforts. 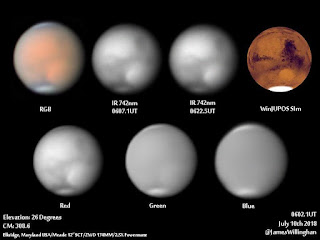 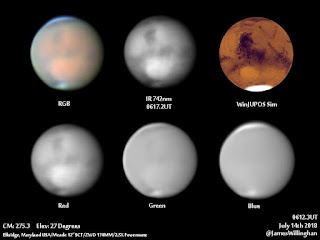 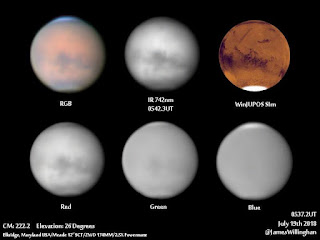 On July 9, 2018, we both imaged Mars, albeit from opposite sides of the state. This gives a great opportunity to see the difference in images acquired at different wavelength.

Realizing I had a tool that could help me to partially see through the clouds of dust, I used the CH4 filter to my benefit. By replacing the usual luminescence image used to create a color image with a CH4 image, I had a higher resolution base on which to stack my red, green and blue images. The final product is clearer with much more surface detail present.

What does the future hold for the current Mars apparition? Typically, Mars’ seasonal dust storms reach a peak as the planet reaches perihelion. Unfortunately, Mars does not pass its closest point to the sun until September 16, 2018. However, the current dust storm is so intense, it prevents sunlight from reaching the surface. With less sunlight reaching the surface, there is less energy to kick up the dust into the atmosphere. My most recent image of Mars seems to confirm the dust is clearing. 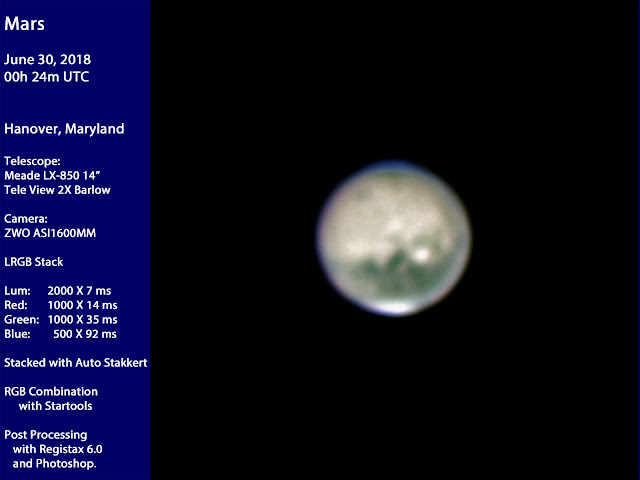 If you would like a project to attempt, may I suggest imaging the Martian moons, Phobos and Deimos? When the American Spacecraft Mariner IX entered orbit in 1971, it found the entire planet ensconced in a global dust storm. Instead of passively waiting out the storm, the probe turned its attention to the two Martian moons. These moons are at their brightest now. Two years ago, I easily imaged both several times with my 10-inch. In fact, I have visually observed the outer moon, Deimos with little difficulty.

Obviously, our plans of a banner summer for Mars observation have been thwarted. However, we find ourselves perfectly placed to observe the Martian “Storm of The Century.”